Sugar adds calories – whatever it is called

Regarded as a villain; thought of as a possible cause of some cancers and all sorts of ills, manufacturers disguise sugar in different ways to make it more acceptable. Livestrong, the US Cancer charity, warns”

Sugar is one of the most common food additives used to improve the taste of foods and beverages and prolong the shelf-life of countless packaged food products. And all that sugar is hiding in some pretty unexpected places. (Case in point: Did you know that, cup for cup, there’s more sugar in ketchup than vanilla ice cream?)

Different types of sweeteners, substituted for sugar, can be tagged ‘sugar-free’, but still contain calories.

To help sort out differences, Livestrong has some pretty intelligent and easy-to-understand information:

“Sugar substitutes fall into one of two categories: natural sweeteners (which include sugar alcohols like erythritol) and non-nutritive sweeteners like sucralose (aka Splenda)”. A tablespoon of ‘ordinary’ sugar contains 40 calories

If you are savvy, you can take in fewer calories without losing nutrients in the process. Drink plain water/fizzy water instead of sweetened drinks; choose low-sugar jams and syrups; buy canned fruit packed in water rather than syrup; reach for salsa, mustard or hot sauce over ketchup and barbecue sauce and opt for low-sugar breakfast cereals.

Livestrong are very patient-focused, and have published a list of the major ‘sugar’ type foods, their

Dates are berries from palm trees that come in two types: soft dates and semi-dry. Using fruit as a sugar substitute is a good strategy for reducing added sugars because they are natural sugars that are accompanied by high dietary fiber, phenolic compounds, vitamins and minerals.

With a GI index of 42, dates can sweeten baked goods and smoothies — but note that a little can go a long way in terms of sweetness, especially when using dried dates. Average calories: 20 per date (7.1g) 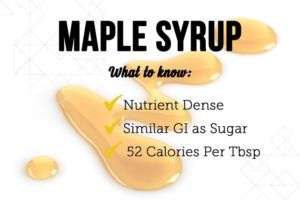 Maple syrup comes from boiling the sap from maple trees. The color of the syrup is a result of when the sap was tapped in the season; early season maple sap produces lighter syrup and later in the season, darker syrup.

N.B.  Many maple syrup products are blended with corn syrup and/or cane sugar syrup because maple syrup itself is expensive. Its glycemic index is 54, and it contains higher levels of minerals and fewer calories than honey. Calories: 52 per tbsp 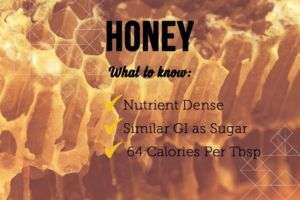 Honey is derived from the nectar bees create in their honeycombs. Sugars in honey are 40 percent fructose, 35 percent glucose and two percent sucrose. While honey can be used in baking, it should not replace sugar 1:1, and the liquid in the recipe must be adjusted due to the water content in honey. Honey also has a more pronounced flavor than sugar.

Its GI is 61, while table sugar is at 58, but it may offer some extra minerals, such as zinc and selenium. Calories: 64 per tbsp.

Coconut palm sugar comes from the sap of a coconut tree. It has a similar taste and texture as brown sugar. Many believe it is a better sweetening option due to its low glycemic index. However, according to the American Diabetes Association, it should not be treated differently than sugar as it has a similar profile, offering about the equivalent in calories and carbohydrates.

The glycemic index for coconut palm sugar is 35 because it is mainly sucrose with small amounts of fructose and glucose as well as inulin (a fiber that acts as a prebiotic), nutrients and antioxidants. Calories: 45 per tbsp. 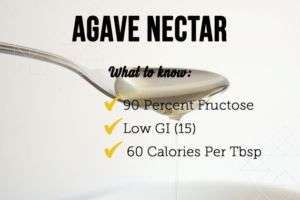 Agave nectar is often used as a substitute for honey for vegans; however, it is much sweeter than honey, though, like coconut palm sugar, its GI is lower, at 15. Since it tastes very sweet, less is generally used, which is why some claim it is healthier. Yet because it still contains a high level of fructose, the level of healthiness in the long term is debatable. Calories: 60 per tbsp. 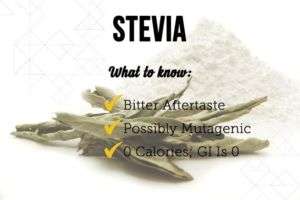 Stevia comes from the leaves of the South American plant Stevia rebaudiana, which is 200 to 300 times sweeter than sucrose, but can be bitter with an astringent or metallic aftertaste. It is a newer sweetener but has been used in countries, such as Venezuela, Brazil and Colombia for more than a thousand years.  The glycemic index of stevia is 0. Calories: 0

Foods made with sugar alcohols (such as xylitol, sorbitol and erythritol) instead of sugar can be labeled as “sugar free” because of how low the calorie count is for sugar alcohols.

Sugar alcohols are not carbohydrates like sugar is. Sugar alcohol can be found naturally in produce, but most packaged varieties have been created in the lab. These alcohols are 20 percent to 100 percent as sweet as sucrose but are not digested by intestinal enzymes, which is why they have fewer calories. They’re used in diet foods because of their ability to be slowly absorbed and because they do not contribute many additional calories. 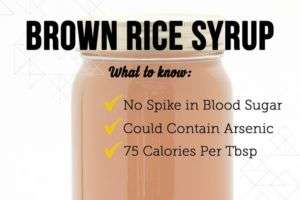 Brown rice syrup is a viscous liquid derived from brown rice treated with enzymes to break down the starches.  Not as sweet as white sugar, it has a slight butterscotch flavor.

Due to it containing about 50% complex carbohydrates and 3% glucose, rather than only simple carbohydrates, its sugars are released more slowly into the bloodstream, creating a less visible spike in blood glucose.

However, according the “The Essential Good Food Guide” by Margaret Wittenberg, the level of glucose can be adjusted during the manufacturing process, so the glycemic index of the syrup can be dependent on the individual product. Also of note, there have been recent concerns about the levels of arsenic in brown rice because the plant absorbs arsenic from the environment as many plants do, and the hull, which is present in brown rice but not white rice, retains the absorbed arsenic, according to the Mineralogical Society of America.

The FDA has increased its arsenic testing of rice products since 2011 but has yet to release a comprehensive risk assessment; Consumer Reports recommends limiting consumption, especially for children under 12 months.  Calories: 75 per tbsps. (in the Lundberg brand) 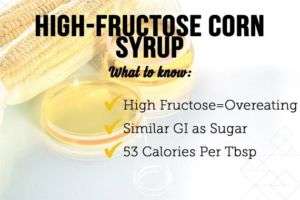 Corn syrups are a byproduct of cornstarch production and are often used in products to reduce the manufacturing cost. While corn syrup is essentially 100 percent glucose, high-fructose corn syrup can be anywhere from about 40 to 90 percent fructose, and because it is a synthetically made sweetener, a monosaccharide, the levels of fructose can be very high, rather than a combination of both fructose and glucose like sucrose.

It has a high sweetening power, it is not as sweet as sugar or agave nectar, so more of it may be used in packaged foods. Fructose moves quicker in the digestive system than glucose, so it may be harder to feel satiation, increasing consumption. The GI of high-fructose corn syrup is similar to that of sucrose. Calories: 53 per tbsps.

Sucralose is a non-nutritive sweetener able to withstand high temperatures, so appropriate for baking.  It is 600 times sweeter than table sugar. There are controversial opinions about its effects on health According to a 2013 study in the Journal of Toxicology and Environmental Health found, it does in fact get metabolized once ingested and can negatively affect gut bacteria, impact the body’s insulin responses and its broken down components can be gene altering.

Despite the controversies, it is not recognized in the body as a carbohydrate and therefore has been deemed as appropriate for patients with diabetes. The glycemic index of sucralose is 0.  Calories: Less than 5 per packet of Splenda (1 gram). 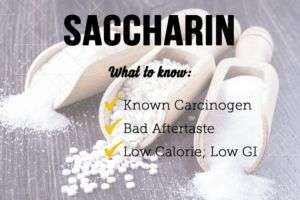 Saccharin One of five nonnutritive sweeteners approved by the FDA for use in the US, saccharin was discovered accidentally when a scientist had some residue left on his hands from the lab when he made dinner rolls that turned out extra sweet.

Saccharin is 500 times sweeter than sucrose. It is used now in many baked and processed foods, although one of the drawbacks of saccharin for some is its aftertaste. There also has been controversy about the safety after some research on rats, including an FDA-proposed ban in 1977.

Instead, there is a warning label requirement on items containing saccharin now. It may cause cancer, but it appears to be one of the weaker known carcinogens.  The GI of saccharin is 0.  Calories: Less than 4 per packet of Sweet’N Low (1 gram) 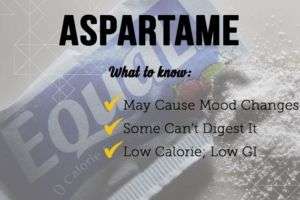 Aspartame Another one of the FDA-approved nonnutritive sweeteners, it is one of the most controversial artificial sweeteners and yet the most popular.

Aspartame is mostly found in soft drinks and is 180 times sweeter than sucrose. The GI index of aspartame is 0. Calories: 4 per gram

Recently the BM had a report that sugar intake, including fruit juice, is associated with a higher incidence of cancer. A fundamental question is whether examining a single nutritional villain in isolation is meaningful, rather than acknowledging the need for a wide ranging, varied, and balanced diet?

With many thanks to Livestrong, and Getty Images for photos. 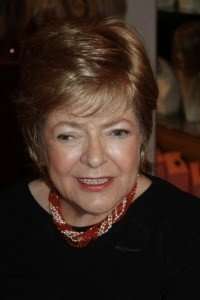 Her name, Verite: it’s Huguenot. And means TRUTH. So she try to live up to this and ensure that she search out the truth behind all the claims for treatments. Her site: AfterCancers.com, created specifically for cancer survivors, their friends and family, as a resource to use after cancer treatment.  Written and created by a cancer survivor who wanted to share her experience of life after cancer, and information on products that can be useful. 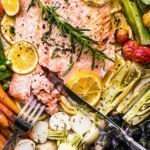 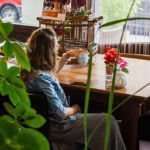