Cherie Mathews and healincomfort.com were featured in the September 29th issue of the Austin American Stateman.

Thirteen years ago, when Austinite Cherie Mathews was released from the hospital after breast surgery, she was handed two surgical drain bags to carry around.

“But I use my hands,” Mathews, now 53, said. “When I was offered shoe laces and safety pins to manage my post-operative equipment, I asked, ‘Why don’t you offer the right equipment?’ I was told that women have always suffered in silence.”

Why did I have to go home and make do?” she says. Not only that Mathews was released in everyday clothing. “It didn’t work. Movement and breathing were very painful. It hurt to brush my teeth. Standard clothing is difficult at best to get into, never mind the surgical drains protruding from my body.”

So Mathews invented and patented a line of clothing called Heal in Comfort. Her light, loose, moisture-resistant shirts without zippers or buttons include interior pockets to carry surgical drain bags.

“I called it Heal in Comfort instead of Heal in Burlap,” she quips. “There just was no standardized post-operative equipment for women after a mastectomy.”

To insure that women without sufficient means could take advantage of the invention, Mathews encouraged the founding of a nonprofit — to keep the businesses straight, she does not serve on its board — called Heal in Comfort 4 a Change.

To raise money for the special shirts, the group stages a Be Brave and Fight Like a Girl Party on Thursday at Shoal Crossing.

“So far, we have not turned down one hardship case across America,” she says. “It’s a blessing to able to say: It’s on its way. Heal in comfort and dignity.”

Mathews grew up in Florida where she watched her parents engage in life consciously and creatively. Her father is a retired architect, her mother a veteran of Woodstock, Greenpeace and efforts to save teens on drugs. “Not for pay, for spirit,” Mathews adds.

What kind of kid was the future inventor of Heal in Comfort? “Self-sufficient, problem solving,” she says. “Never fit in the box, saves animals.”
Although her dad was very successful, Mathews was expected to make it on her own.

“I had to assemble my first car from parts and a manual,” she says. “He is a teaching dad. He’s still my hero.”

Michael Barnes writes about Austin’s people, places, culture and history. He also writes the Out and About social column and blog. 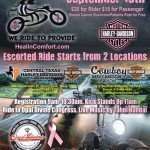